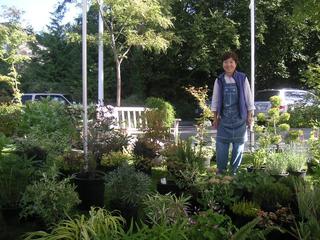 In the spring of 2010, I began a series of essays based on the question, “Why did you become farmers?” asked of two couples I had known from their previous, book-related lives. The answers were both interesting and surprising to me.

Along with biographical questions, I found myself asking somewhat apocalyptic questions such as “If there were a food shortage, is there some way I could earn food from you?” and “Can this island support its own population?”
I felt foolish asking these questions, especially since I am not anyone’s example of a good laborer. But it seemed important, in terms of my overall understanding. The more producers and vendors I interviewed, the more my questions seemed relevant. It turns out, if our outside food supply was interrupted, the supermarkets would run out of food in a day. And food production, at least in the Pacific Northwest, is largely dependent on the amount of human labor that can be provided.

The more people I talked to, the more, I realized, were directly involved in food production, from kitchen gardens to restaurant suppliers, from foragers to scavengers. Growing, gathering, preparing and eating local food is a major pastime, and at least the last part is something in which everyone, my household, participates. Food is the hub of most social events. Eating is not only an agricultural act, as Wendell Berry said, and an economic and political one, as Michael Pollan added, but a social and religious act as well.

I found tendrils reaching out from this island to my parents’ country of Mexico and back again, in a north/south relationship that probably existed long before the current crop of residents arrived. Because of improved transportation, the reach is farther, but the principals of food production remain: more sun equals a longer growing season, more labor equals a larger harvest. Politics and economics complicate, but do not negate this exchange.
I came across a quote that brought these elements into focus for me in High Country News: “There will be great clamor from climate refugees seeking a safe haven in those few parts where the climate is tolerable and food is available… We will need a new set of rules for (limiting the population in) climate oases.”

I’m not ready to declare the end of the world, much less set the rules, but I realized that I live in a climate oasis. At some level, I must have recognized this all along, and this is in part why my neighbors and I expend so much energy tracking development and land use. It is an abundant, but fragile environment, and on an island, it is easy to see who is responsible for preserving it: we are.

Kathleen, Thanks for posting a link to this blog on FaceBook. The title of your WIP intrigues me, makes me think of the name my husband and I gave to an utterly unpleasant landlord in CT, "Happy". The people who inhabit your work in process promise not to be that clueless. As for my own organic gardening habits, my Chinese doctor advised me to plant a seed as to regain trust in Mother Nature after loss of perfectly healthy baby during childbirth.

Hello Judith -
Thank you for sharing your story with me. In this case, I am the clueless eater, and the people I interviewed are certainly more knowledgeable than I. I am so sorry for the loss of your child. That was a wonderful approach by your doctor, that in order to complete our cycle of life, one must establish trust in nature.