Treasures in Heaven is about the things we yearn for, but can never quite grasp. Set at the end of the 1800's in Mexico City, Estela arrives from the north in search of her lover. She finds work as director of a school for street children conducted by an eccentric, wealthy woman. The school expands to include the mothers, and Estela becomes a participant in the feminist movement of the time. The astonishing things she learns about the world transform her into what we would recognize as a modern woman. This is the last of three novels set in 19th Century Mexico, and received the 2001 Washington State Book Award. (Chronicle Books, 2000). 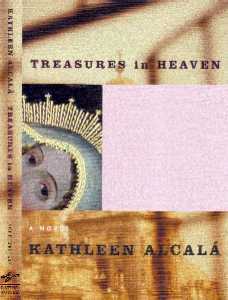