Is This My Beautiful House? 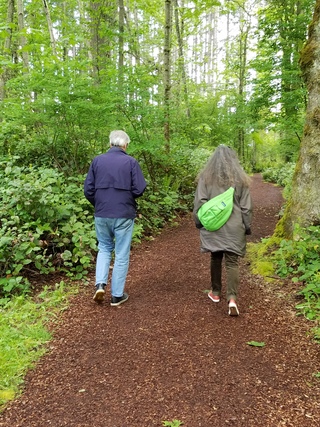 Is this my beautiful house? as David Byrne asked. I am luckier than most of the people in the world, if luck is measured by things, comfort, access to food, and safety.

I spent May on a different island, concentrated on my writing. I produced a talk called Prentice Bloedel and the Idea of the Sublime, in which I explored the relationship of a timber magnate to the land he chose to preserve in – not its original state, which had long been changed – but in a state that makes it accessible to people more accustomed to streets, sidewalks and groomed paths. And yet, given the scale of these northwest woods, there is still something of the wild in it, something that goes beyond what can be described with words: the Sublime.

These days, I am acutely aware of my privilege, of the people who are desperately trying to save their children from the horrors of war. My parents were brought north from Mexico to escape a war in which 20% of the population died. My parents and their parents were welcomed into this country as productive members of society. While some of my relatives returned and some did not, we have been able to maintain our kinship patterns, which historically, have involved people traveling from north to south and south to north since long before any of us can remember. We are not rapists and murderers. We are workers, teachers, artists. We are bakers and farmers and housewives. We are people who cherish our children and long to give them a safe place to grow up.

Today, I cannot count the places in the world where waking up alive is a miracle. Each morning we are greeted by the rude, limited vocabulary of a man who realizes that he cannot outwit his enemies, can only hope to bluster his way past them. Mexico is angry. China is angry. Even Canada is angry! We feel the foundations of civilization tremble as teams of lawyers and bureaucrats work to roll back any progress we might have made both on the local and national level in terms of the well-being of the poor, the conservation of natural resources, and the improvement of the environment.

Not long ago, it looked as though we would succeed in cleaning up the air and water around us before permanent damage was done, but I think that milepost has come and gone with the suddenness of a freight train full of crude oil. I've marched through the streets of Seattle at least three times since the beginning of the year, defending women's rights, immigrant's rights, fighting off corporate interests that now overtly disdain the rights and environmental issues that go hand in hand.

Last week, a resident orca in Puget Sound, a member of the J Pod, delivered a calf that died within a half hour of birth. The mother, called Tahlequah by humans, has been carrying the body, by its fin or across her nose through the ocean for over nine days now. She is clearly grieving, whether or not in the same way a human mother would grieve. And I feel responsible. The J Pod has not had a live birth in three years. They are starving. In the meantime, I can go to the grocery store and buy salmon any time I want. How did this happen?

Then there is a forest with a walking path. Emanuel Kant said that the beautiful is small, measurable, but the sublime is beyond measure, even fearful, in its glory and magnitude. Despite the thousands of acres Prentice Bloedel helped to clear across North America, he underwent a moment of transformation that compelled him to share his experience with others. When Bloedel and his wife Virginia began to walk the relatively modest 150 acres on Bainbridge Island they purchased for their retirement, something shifted, something changed, so that he was moved to see the forest with new eyes.

This is the sort of transformation we need to undergo. We must see the forests, rivers and oceans with new eyes. We must see all people with new eyes, as marvels of existence, as deserving of as good a life as we wish our own children.

We each see a bit of the puzzle, or understand some of the science, or some of the economy. We tell ourselves and each other stories to justify our own places in the world. We must widen those stories to include a few more people, a few more places, until every person and place is held in esteem by someone.

These are the types of stories collected in my book, The Deepest Roots. After studying these topics and interviewing people about their stories since 2012, I am running out of excuses to call myself "The Clueless Eater." I am a little less clueless, although much of the pattern is still hard for me to understand. But I am ready to change the name of this blog to "The Deepest Roots," after the stories that sustain us through good times and bad, that tie us to our land, our ancestors, and our beliefs. I live in a storied land, meaning it has been cared for and nurtured both in physicality and in the imagination. Is this my beautiful house? Only if I work with others to keep it that way.

A touching piece that permitted me to reflect on my family roots and the places I have experienced. I am caught between cultures my entire life, in a twilight zone between the arrogance of the white guys club and the humility of a Spanish American way of life. Thank you for this piece, I appreciate the effort and evident sincerity.

Thanks so much, Jay. That means a lot, coming from you. I know that many generations before us have fought for survival, for justice, but very few people manage to achieve that "shift" in perspective, much less lead others to it. But we can keep trying.

A Walk in the Park 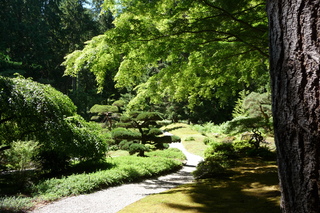 The Bloedels saw nature as something too strong and rough to be experienced without the filter of a human sensibility
In the cool of a day predicted to get very hot, we walked through a gentle forest. Birds called and squirrels chittered at the small groups of visitors strolling carefully groomed paths.

The Bloedel Reserve was started in 1950 by Prentice Bloedel, son of timber baron Julius Harold Bloedel. Julius made a fortune harvesting  Read More
Be the first to comment