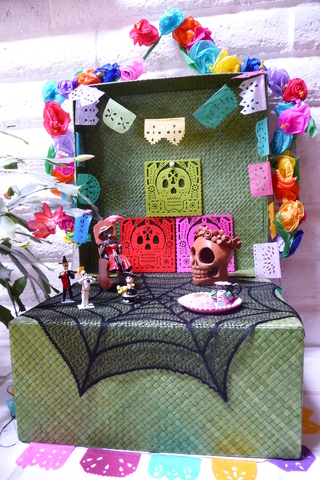 Día de los Muertos
The season has changed from an extended dry spell to the first rains of winter. It is time for the Day of the Dead. We are saddened by the departure of several relatives this year, from the last of our parent’s generation, to a much beloved in-law in Denver.

Falling as it does in the harvest season, el día de los muertos is a reminder that we have our seasons, that we are organic as well, dependent on the lives of plants and animals in order to continue our journey.  Read More
2 Comments

Tags: local food, sustainability, Bainbridge Island, Washington, food, agriculture, Helen and Scott Nearing, Sweetlife Farm, Holt Ranch, CSA, Abundantly Green
I continued my questions by driving out to see my friends Marilyn Holt and Cliff Wind, who inherited a farm from Marilyn’s father. About four years ago Holt Ranch became a CSA, or Community Supported Agriculture farm, which means that individual families pay at the beginning of each season to receive a share  Read More
Be the first to comment

Tags: local food, sustainability, Bainbridge Island, Washington, food, agriculture, Helen and Scott Nearing, Sweetlife Farm, Holt Ranch, CSA, Abundantly Green
Sweet Life
Bainbridge Island curls like a fist of rock around Eagle Harbor on the western edge of Puget Sound, thirty-five minutes from downtown Seattle by ferry. Over half the working population commutes to Seattle every day on a Jumbo Mark II, either the Tacoma or the Wenatchee. The ferries resemble floating airports, they are so large and stable, each capable of carrying 2,500 passengers and 200 vehicles at a time.
I have joked that, if we were completely cut off from the mainland, Bainbridge Island, with its population of about 25,000, could live off of locally made white wine and goat cheese for quite awhile. Every April the farmer’s market reopens, and we have our choice of – goat cheese, honey, and a few vegetables. The truth is, our growing season is short, and there are just some things that won’t grow here in quantity. The soil is bad, and the local gardening guru, Ann Lovejoy, recommends buying good soil and dumping it directly on top, rather than attempting to work it into the rocky hardpan that dominates the terrain.
As a result, most of our produce is still purchased through the locally owned Town & Country Market, and a Safeway store. Once, Bainbridge was famous for its strawberries, but a blight, along with the forced internment of Japanese American farmers during World War II, ended their production. By the fall, a greater variety is available, but as Americans, we are used to having seasonal products year-round: lettuce, tomatoes, broccoli, avocadoes, citrus fruits, things that grow in limited quantities or not at all in our cool, wet climate. “There are no seasons in the American supermarket,” according to the movie, Food, Inc. (2008).  Read More
1 Comments

A lovely tribute to Sweetlife Farm and the Fortners, Kathleen. Thanks!