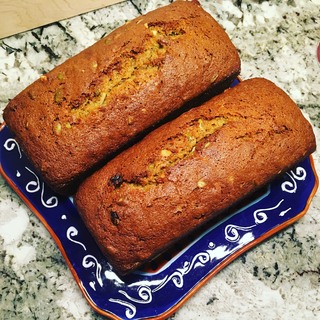 Persimmon bread based on a James Beard recipe.

The last house my parents owned, in Grand Terrace, California, had a persimmon tree. This meant that every fall, the counters, table, and window sills in my mother's kitchen were crowded with reddish brown fruit that resembled pincushions – round but sort of squat, with a large, star-shaped green bit at the top, the calyx, where the fruit had been attached to the tree.

My mother made them into breads and cookies that I associate with Thanksgiving. Any fresh fruit was loved in our house, and we were only too glad to go through the trouble of harvesting, ripening and baking with this odd fruit that doesn't behave like most of the other fruits in the western United States.

The reason for keeping the fruit on display was that persimmons are not ready to eat until they feel completely squishy, with the pulp loose inside of the pliable skins. Try to rush them, and you are met with an oh-so-bitter taste that puckers your mouth.

According to Molly Watson's blog, "The Spruce Eats," the persimmons we eat now originated in China, but were wholeheartedly adopted by the Japanese. Over two thousand different cultivars exist. Two are widely eaten, the Hachiya and the Fuyu, and the persimmon was introduced to California in the mid-1800's. I have never encountered a Fuyu, which is supposed to be firm and crunchy, like an apple, I suppose. I have never encountered one, having grown up with the Hachiya. There are four trees of them in Red Pine Park, the community garden where I grow our vegetables. They were planted by nursery owner Junkoh Harui, whose house used to stand at the location of Red Pine Park.

Last year, I admired the persimmons as they began to show some color. The fruit hides behind large, shiny leaves, and one must examine the tree closely to see the growing fruit. Unfortunately, the trees were completely stripped long before the fruit was even close to ripe, and I was unable to taste them. This year, I watched carefully and brought three home to finish ripening. They continued to stay a pale, rosy green, until our neighbors gave us a little vodka. Not to drink, but to soak a paper towel and wrap with the persimmons in a plastic bag to finish ripening. The vodka gives off dimethyl nitrogen, which ripens the fruit. Wrapping the persimmons up with an apple is supposed to work, too.

When I finally peeled the largest persimmon and scraped out the pulp, it was orange and gelatinous. The taste to me was okay, but not brilliant in any way. I went ahead and used a James Beard recipe to make persimmon bread. The recipe a little fruit-cakey to me, including a call for either brandy or cognac, so I skipped some of the dried fruit and added pumpkin seeds. As you can see, the loaves turned out a vibrant orange, and the taste was scrumptious. This is one fruit that seems made for baking. Here is James Beard's recipe at David Libovitz' website: https://www.davidlebovitz.com/persimmon-bread/ Thank you, David!

Like the apple, there is a persimmon native to North America, but it is berry-sized. The Native Americans told the settlers they had to wait until first frost before the fruit were sweet enough to eat. The Algonquins called these little persimmons putchamin, pasiminan, or pessamin, depending on the dialect of the tribe. I think people still eat them in the Eastern United States.

This is a good post and really helpful for every reader who visits here. The author could select an interesting topic to write. He could express what is in his mind with clear sentences. So, everyone can easily understand this post. I really happy to visit here and make a review.

Your good knowledge and kindness in playing with all the pieces were very useful. I don’t know what I would have done if I had not encountered such a step like this.