The Earth is Flat 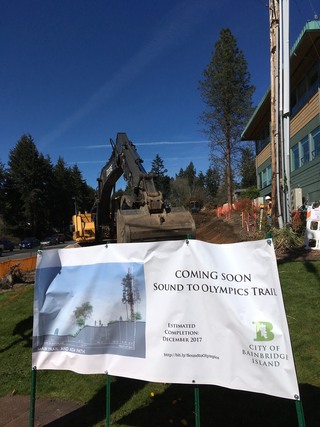 It seemed like a good idea at the time. A non-motorized trail that would run all the way from the ferry terminal to the Olympic Peninsula, providing a safe way for bicyclists, wheelchairs, and pedestrians to get closer to the ground. Wilderness would be accessible to all, and cars would be kept in their place. I supported it. I thought it would maintain a green corridor through the middle of the island.

This was a case of “be careful what you wish for.” I just reviewed the drawings and specs made available to the public, and nowhere does it say that “ADA accessible” means that the trail will be 16’ wide, that hundreds of trees would be slaughtered along the highway, exposing the houses and condos to the east of the highway to its view and noise, or that the way it would be made “accessible” would be to flatten the small, gently forested rise that once greeted visitors.

Hearings were held. Dimensions were discussed. Maps and laser pointers were in evidence. Looking closely at the map now posted, the trail is overlaid on an outdated map that still shows an earlier forest that was cut and developed into housing over the objections of the neighbors, including me. A drawing on the website shows people walking on a trail high above the traffic, separated from it by a mix of tall and short trees. Not only are all the trees gone, the hill itself has been removed. There are labels showing the width of the highway, the width of the separation, and the width of the trail. The numbers are so tiny, I had to blow it up on my computer to see that, sure enough, the trail is shown to be sixteen feet wide. We were told at all the hearings that the trail would be 12’ wide, and I objected to that, once I realized how many trees would go. No one ever mentioned the additional two feet on each side of the trail that would be cleared of all vegetation. “Many of these requirements were necessary for the trail to be accessible to resident with all types of mobility considerations,” says the city’s description of the process.

I doubt that anyone with “mobility considerations” will go up that trail unaided by either an attendant or a motorized chair, although this is supposed to be non-motorized. The “serious” bicyclists have already said that they will stay on the highway with the cars, for some reason.

The neighbors started screaming right away, although virtually all the trees were cut on the first day of the project, so it was already too late. Staging is taking place on a lot in our neighborhood that, oh right! Did not have a permit to do so.

As I drive by the construction on the highway each day, I can see the stumps of groupings of trees that were cut, many of which seem as though they are far enough away from the route of the trail to have been spared. A few trees were saved by neighbors who, as with my tree and sidewalk case, went out and persuaded the contractors to leave them.

At this late date in our evolution as ground dwellers, humans are just starting to understand trees. What we see above ground is only one manifestation of a tree. Below us, roots reach out for nutrients, water and sustenance. Beyond that, trees communicate with each other, sending minerals to a neighboring tree in need, using fungi to send signals along the way. They hold each other up not only as a community of sky-dwellers more resistant to wind if grouped together, but as holders of common root systems and even genetics. A stand of aspen in Utah known as Pando (“I spread”) is supposedly the largest single organism in the world, and perhaps the oldest at 80,000 years. Each tree a clone of its neighbor, all springing from the same roots.

Cutting down trees in a straight line along the highway is hardly the way to maintain healthy tree cover. Much of this will be replanted with native shrubbery and trees, but it can never reproduce the community of plants that had grown up over the years, supporting each other in natural groupings. Cutting away much of the hillside will make it even more prone to sliding as our weather events grow more extreme. Miles and miles of new (impervious) pavement will deflect even more water from our aquifers.

“The Sound to Olympics Trail (STO) project will provide a separated shared-use pathway along the SR305 Corridor (from High School Rd to Winslow Way).  The project will encourage non-motorized transportation, provide ADA accessibility, improve drainage and safety features, incorporate native plantings with visual and acoustic buffers, and promote all modes of non-motorized transportation and connectivity to branch trails.  The project will complete the “first mile” of the Sound to Olympics Trail and study potential branch trail connections. The new pathway will connect to the Ravine Creek Non-Motorized Bridge and an existing 800-foot section of the STO Trail.”

I really hope the trail leads to a new appreciation for the natural world, because if not, it is merely a manifestation of urban creep as Seattle rapidly develops. Seattle has probably not seen this much development since the Gold Rush. I worry that Bainbridge will become merely a corridor for people seeking a quick hit of the outdoors, stopping merely to consume a meal, and not realizing it has its own ecosystem, its own fragile community of the big three: tree cover, agriculture, and human dwellings. All of this is set like a gem into Puget Sound, already fighting for its life in the path of human onslaught.

As a newcomer to the island, I presumed these plans were thoroughly vetted, agreed to, and supervised. I don't know which is more shocking. The mayhem of destruction, including the staging area, or the lack of accurate understanding to such a big project. As for my preference, I'd have to say the older I get the more I value trees. The path sounds nice--it's not a horrible development, and yet I long for the mindset when we work to save trees. And yes to the fears you voice about being a tourist destination and bedroom community to the sprawl of Seattle.