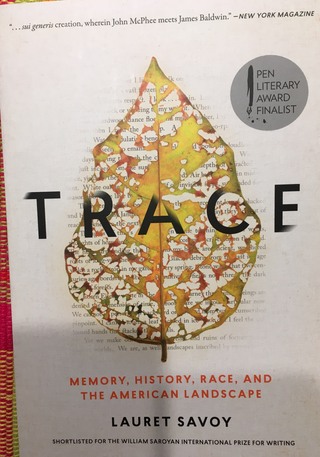 This book was recommended to me by Donna Miscolta when it first came out. I was too busy at the time to read it, but I just finished it a few days ago and have to share my joy.

Savoy, an environmental sciences and geology professor at Mount Holyoke College, travels the land with the keen eye of a scientist and the sensitive heart of a memoirist. Each place she pauses, she leads us in catching our breath and examining the land for its ancient presence, “grounding” us in the landscape before turning to her personal connections, or disconnections, to the land. Like me, she was born in California to parents from elsewhere, and her yearning for that landscape is as unfulfilled as mine. Our families were never quite settled, and the notion that somewhere else would probably be better haunts our childhood memories. Yet every time I sit down to write, I find myself describing some aspect of that land and place before moving on to the story at hand.

In addition, the ethnic and racial ambiguities of conquered or enslaved people means that we both carry parts of our stories on our skin, to varying reactions. We each have one light-skinned parent, and I, too, remember the “that’s your daughter?” in places of segregation and red-lining, places where you could hear a friend in the next room lying to his father about your origins. That’s when I learned that Italian was more acceptable than Mexican in California.

“… to live in this country is to be marked by its still unfolding history,” Lauret writes.

Only decades later did I discover that a great-aunt had taken on that very disguise to make her way through the world. Upon her death, her children discovered her correspondence with my father, having kept our branch of the family a secret from her branch.

On her journey, Lauret meets some of her cousins, but many of them are already in the graveyard. I especially appreciate the last two chapters – “Migrating in a Bordered Land,” reconstructing her mother’s time as a surgical nurse in a segregated Army, while stationed at Fort Huachuca; and “Placing Washington D.C. After the Election” – as chapters that recall my own blood links and early adventures into a larger world.

As someone with a very visual memory, maps would have helped me place these landscapes in my mind’s eye.

“Lauret Savoy,” says bookseller Rick Simonson in his blurb, “has given us an invaluable work of better knowing our past, seeing our present, imagining our future.”