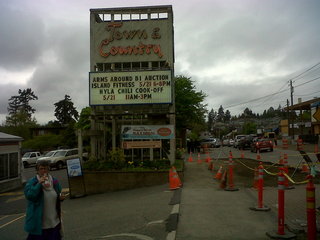 The Town & Country Signboard
Town & Country Market 2
A few days later, I met Vern and Rick Nakata in a small, upstairs board room across the parking lot from Town & Country, near the Bainbridge Post Office. Glen was late. All three cousins are in their mid to late 50s, and all wore some piece of clothing with the Town & Country logo on it – a vest, a cap, or a shirt, in the khaki or forest green that marks a Town & Country employee from down the block. The three are first cousins, and they are third generation both on the island and in the grocery business.
“Glen is probably talking to someone right now. We were encouraged, not restricted, to go into the family business.”
“T & C,” Vern added, referring to the original store on Bainbridge, “has always been the little engine that could”.
I asked about the local produce connection.
Margaret Clark was “ahead of her time.” Vern said. He worked in produce then. Margaret was a sociologist employed by the Bureau of Indian Affairs in California who became “disheartened,” moved to Bainbridge, and went to work for the market. The eighties were when people got interested in organics. “At the time,” Vern said, “we struggled to maintain a corner as organics.” She later served on the National Organic Standards Board. Margaret next went to Oregon Tilth, then to Kauai to work for the National Tropical Botanical Garden, where she now works as the Seed Bank Manager. Margaret is the person who brought Brian McWhorter in. When it was determined that he could meet the three main criteria Rick Pedersen had outlined for me – integrity, supply, and distribution – Brian was contracted to supply organic produce for the store.
I asked what would happen if we were cut off from outside supplies of food. It turns out that few people keep more than a day’s worth of food in their homes, and often shop daily at the market. This surprised me, since we keep about two weeks worth of dry and canned goods at our house. This is not in anticipation of the end of the world, but as an earthquake precaution. The whole area is subject to periodic earthquakes, but a new fault was discovered shortly after we moved to Bainbridge when it delivered a nasty shock to all of us. It made a noise, like an explosion, and I was sure the nuclear submarine base west of here had blown up. A child of the San Andreas Fault in California, even I was rattled.
“Y2K made people talk about emergencies,” Vern said. “We brought in a trailer/tractor rig with extra supplies.”
The store, too, would be out of food within a day if off-island supplies were cut off. I remember being snowed in for three days one December, no power, with my stepdaughters and their husbands, who were big eaters. Everyday my husband and I would put on backpacks and walk to the market to see what supplies had made it through. T & C has emergency generators, but cannot keep all the cold cases going. They were serving fish chowder and other warm treats every day just to use the food. Some families had no way to heat or cook, or even water if their houses were served by a pump and a well, so this was a boon to them.
I asked if interest in local produce would continue.
“I think so,” said Glen. “We now use signage that says ‘Northwest Produce.’ We are looking into growing strawberries again. It is part of the Nakata family history.” But since the blight, which has stayed in the soil, they are hard to grow on the island.
“We re-established a relationship with the Sakuma family. They were from Bainbridge, but after leaving the camps, they settled in Burlington (Washington), and we buy from them. They also own property in California.
“For over fifty years, we have worked on those relationships: with farmers, distributors, salespeople. At least for these stores, the demand for local produce won’t go away.”