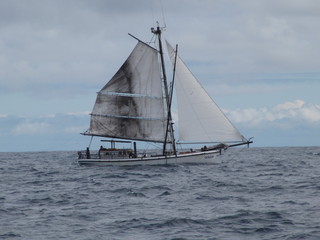 The 38 foot Ocean
The power was out when I interviewed Paul Svornich, a third-generation fisherman on Bainbridge Island. By the light of a flashlight and a lantern, his wife Lorraine Svornich carefully pasted labels on cans of tuna caught by Paul from his sailboat 50 miles off the Oregon coast.

No one goes tuna fishing in a sailboat,except Paul Svornich.

“My family was involved in purse seining. The Croatians pioneered and developed this type of fishing here. My dad, both uncles, and both grandfathers were fishermen. I grew up in that environment. It’s pretty cool, but I wanted to try something different – something low impact, with a small footprint.”

Briefly, Svornich used a trap designed by his grandfather to catch rockfish near Bainbridge, which he sold to Chinese restaurants. But the State Department of Fisheries closed the fishery after a year. “I agree with their decision. We were very low impact, but if regular fishermen came in, they would have destroyed the rockfish population.

“I knew I wanted to fish, but not in the Bering Sea. Most American fisheries have quotas. I’m not opposed to that at all. If a certain user group has a quota, and I don’t catch it, someone else will. I’m just another seagull fighting over fish. So, I chose another area that was wide open. I chose albacore tuna and deep sea fishing.”

Albacore tuna are still sustainable. A warm-blooded fish, they favor water temperatures around 62 degrees. “Salmon are so vulnerable because spawning takes them into the realm of man. No one even knows where tuna spawn or how.”
“I built a really small boat, the Ocean, with a good refrigeration system – no one had done that. I wanted to own my product, not sell it to canneries. I fillet my own fish to sell to Japanese restaurants, and to individuals. It’s really hard. It took me ten years to develop a market.”

Because it’s unusual that Svornich uses a sailboat, other fishermen know who he is. They like the idea, but wouldn’t do it themselves. “They catch a lot more, but mine are worth three times as much.

“I usually go by myself. I fished with Lorraine through the 90s, but then she got sick.” Since then, his adult daughter Kashmira has accompanied him now and then in the 38 foot boat. “I’m out for 3 – 5 weeks at a time, three trips a year during July, August and September.
“I like fishing with a sailboat. I like dancing with the sea, with nature, rather than plowing straight through using fuel. There was a hippie movement in the 60s, which I fell for lock, stock and barrel. I got the opportunity to sail to the South Pacific, and got a sense of a bigger mother. I love the Ocean. It deepens a personal relationship with the sea, and with God.”

Svornich will take the Ocean out again next July. When he returns, look for Lorraine selling Ocean Tuna at the Bainbridge Farmers Market.
2 Comments

My impression is that Paul is living is living a fulfilling life. I found myself wondering if the his fishing and product marketing is his only income, is his wife still ill, and what his daughter fells about fishing? I admire his courage and choices. Nice post Kathleen.

Thanks, Jay. My impression is that Paul makes a good living. His schedule is comparable to that of other commercial fishermen, and he sells at a premium to a niche market. It turns out Lorraine accompanied him last summer, and plans to go again this year. Unsaid in this blog is that all deep sea fishing is dangerous. He loves the life, and this is the risk he is willing to take.