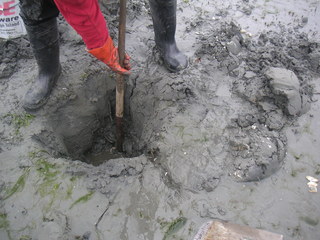 All year, Neil had bragged about the special place where he found geoduck, someplace no one else dug. He made a mystery of it, but said he was willing to share it with me. Eventually, I took him up on the offer, and we picked a day. When I e-mailed the day before to see what time to meet, Neil seemed reluctant to go, although he had already instructed me to go to Walmart and get a shellfish license. Walmart is not that close, so I went online and, sure enough, was able to buy a license for shellfish and seaweed for $12, and print out a temporary license on the spot. It was good for ten days. There are all these rules around harvesting crabs and shellfish in Washington State, and a lot of disputes about who owns the rights to the tidelands and their product. I guessed that Neil’s secret geoduck stash was on public land if I needed a license. I was right, sort of.

Neil loaded a spade and a bucket and two pairs of waterproof gloves into his Ford Explorer. Hilary asked me if I had a bucket. I held up two large size zip-lock bags. She said one clam would fit in each. One pair of the SealSkinz gloves, size XXL, was for me. I could probably fit both hands in one glove. Eating a muffin from the Blackbird Bakery as he drove, Neil set out for a city park at the opposite end of the island from our neighborhood. We passed a dead raccoon on the highway.

“Did you know that Stephen stops and picks up roadkill?’ he asked suddenly.

“I could see doing that with deer,” I answered, “especially if you killed it, or just saw it hit.”

“He eats everything,” said Neil. “Even raccoon.”
I think I made an involuntary sound with a lot of ‘l-l-l-ls in it. I was trying to keep an open mind. Raccoons, like humans, are omnivores, meaning, they eat everything.

We wandered north along the shore, crossing the outlets of small streams that drain the cliffs above, into an area that fronts on large, expensive houses.

Finally Neil found a geoduck he liked. I’m not sure what he was gauging, probably size, depth, and distance from the tide line, but how he could tell the first two from the surface, I didn’t know. Starting a couple of feet from the spout, he began to dig rapidly, circling the clam as he threw sand behind himself. The clam spouted water and withdrew its siphon farther into the sand as more and more of the neck was exposed. The first time I had watched this, I thought the clam was digging itself farther into the sand, and would get away.

Not true, Neil said later. The clam is not going anywhere. The hole immediately begins to fill with water, and then collapses. When the hole was over three feet deep, he set his shovel aside and threw himself full-length upon the sand, reached down into the excavation, and grabbed the geoduck by the neck.