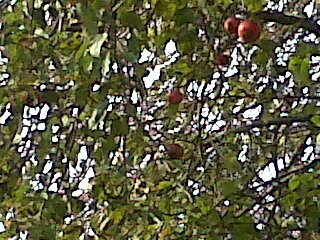 Neglected apple tree.
For the last several weeks, I have been thinking about systems. I realized that the stories I am trying to tell – of farmers, of the land, of what we need to survive and how we would go about securing it – do not fit into a tidy arc of story that will lie down nicely between the covers of a book. I’ve reached the point in writing this book where I feel totally incapable of encompassing these ideas and conveying them to a reader. So I will try to explain some of them to myself. Feel free to listen in.

One of the things that occurred to me is that in these wheels within wheels – for none of these systems can work without the others – there is always a gap that cannot be accounted for. This gap consists of time or product supplied by people who do not get compensated for it; either willingly or by necessity, this product is passed on to others without a discernible exchange taking place.

I remembered a book that had been recommended to me some years ago. I tried to read it at the time, but could not make heads or tails of it. I picked it up again and found a description of what I was looking for.

The book is called The Gift, by Lewis Hyde, and describes how gift economies and commercial economies coexist in the world. Hyde’s concentration is on the value of creativity in modern society, but he starts by describing a number of traditional cultures that depend on gift-giving as a way to increase status and wealth. The potlatch of the Northwest is his first example, in which someone gives away objects in order to accrue status. The objects themselves take on a value beyond their physical use – as food, blankets – and in so doing, return wealth in the form of status to the giver. These objects in turn must be passed on in order to continue to accrue value.

This is partly what I see going on in our systems on Bainbridge Island. The most successful loops contain a portion that is given without hope of return in a material sense. The least successful are those in which an agreed-upon value has yet to be reached between the parties involved. In some cases, the party supplying the product or labor think that what they supply is “beyond value,” like the objects in a potlatch, while the receiving party must translate this gift into commercial value in order to survive. Like the paintings described by Hyde, that pass from the artist into the commercial realm of the art gallery, they are “gifts” that must circulate in both realms. But on Bainbridge, these systems must be made viable in order for us to survive.

As a tangent, a story was recently posted on Facebook of a fisherman in Washington State whose boat was circled by a small herd of deer with pleading eyes. He lowered a ramp and they climbed on board, cold and exhausted, and let him take them to shore. The story is charming, but also haunting. Since reading it, I have wondered, if I had been that fisherman, would I have understood the request? And would I have helped them? I hope so.

This encounter was a visit from the divine in the form of nature. It was a gift to the fisherman, and he was open and ready to receive it. This form of gift makes our lives bearable, more than how many carrots we can grow, or whether or not we can generate our own electricity. This part of the loop, the gift without compensation, must be part of the system in order for the people of Bainbridge Island to stay alive.