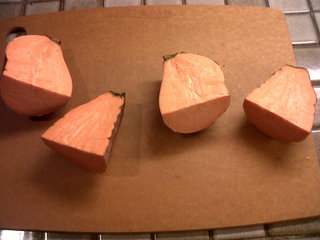 Garnet yams from Abundantly Green
On January 1, we visited friends who live west of the Hood Canal Bridge. In their sunny bowl of a valley, vegetables were still growing under cold frames, and they sent us home with two week’s worth of salads and greens.

Three weeks later, several inches of snow covered western Washington, stranding us all wherever we were. No one on Bainbridge minded much. The snow made everything quiet. Underneath, the plants got a chance to reset, begin again. For now, they are dreaming greenly, nurturing their little buds, waiting for the right amount of heat and light to bring them back from slumber.

We have slowly worked our way through our last pick-up from Abundantly Green. Marilyn and Cliff sent us home with potatoes, carrots, sun-chokes, a box of mandarin oranges, a turnip and a yam. I also shredded and canned a cabbage in apple cider, and we pretend that it is sauer kraut, eating it with sausages. It’s pretty good. There are two bags of green beans still in the freezer, blanched and frozen last August. We had pinto beans one night, sopa de frijoles, and I have been thinking about split peas with carrots.

It has been almost a year since we began trying to eat locally. There are still a lot of things that we buy from other areas – citrus, for example, like the mandarin oranges. And we still buy cereals and rice. If we ate only from the island, someone would build an orangery, and we would walk by and peer in to see how the little potted trees were holding up. We too, could dream.