Who Are My Heroes? 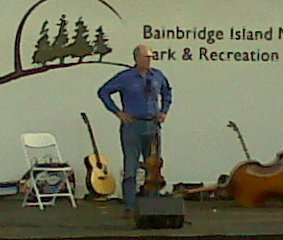 Joel Salatin on Bainbridge Island
A chilly June day brought us an unexpected visit from farming guru Joel Salatin. Marilyn, co-owner of the CSA Abundantly Green, sent me an invitation to hear Salatin at the Day Road Farm on Bainbridge Island, just up the road from my house. It seemed to be only for farmers, but I signed up anyway. Maybe I know the secret handshake by now. But the young farmers who met my car only asked my name, and to follow directions to park.

Salatin first became nationally known when he proved to be a feisty advocate for small, local farming and food consumption in the documentary Food, Inc. he was later visited by Michael Pollen and quoted extensively in his book, “The Omnivore’s Dilemma.” He has since become a rock star in the food business, using his platform to skewer Big Agra and promote the agenda of the individual farmer.

First they fed us. The Harbour Pub, a local business, prepared food for a hundred or so attendees, served at tables under a tent. Dogs had been welcomed, but not children, although plenty of both were in attendance. These people are bursting with fertility. The Pub is one of the local restaurants that buys directly from local farmers. It even features local beer. One of the owners, Jeff Waites, was able to bring Salatin out to the island on short notice. There was an event earlier in the day geared to a general audience.

“Who are my heroes?”asked Salatin once he had been introduced a few times. “Those who touch the earth’s womb hole and leave it essentially, aromantically, romantically, improved."

If you listen too closely to what Salatin says, it doesn’t make much sense. Like a preacher, he goes for the emotional effect, and likes to walk a fine line between inspiration and perspiration. Salatin described how his parents purchased and lost a farm in Venezuela before returning to the U.S. and buying Polyface, a “completely worn out” farm in Virginia that he now owns and runs. His parents could buy it because it was cheap.

“Every person who has made a name in sustainable agriculture,” he said, “started on a rock pile.”

The most interesting thing he said was that portable infrastructures – chicken tractors, electric fences, portable slaughtering facilities –make it unnecessary to own the land. It seemed to me that this was coming full circle to the Native American use of land on a seasonal basis, moving the village to live near the source of food each season, be it the sea, the prairies, the forest, or the shoreline. Did this mean that people will soon give up individual ownership of land? Not likely, but it implies that young farmers have more options, perhaps in coops to lease land or share equipment.

“Farmers markets need to be year-round and have a common cash register. When a farmer and customer talk, we need to be free to tell our story.”

Enjoyed your reflections, very much. I chuckled that you had the same puzzled reaction to the "womb hole" comment. I thought perhaps I had misheard, then played it over in my mind and decided it might be an "in joke." Cliff was put off by his preachery way even though he agrees with Salatin.

We are living his other comments. We are struggling to become a functioning diversified farm because we have a clay soil, bad worms in the soil, and we have to make our own good dirt. The Farmers Markets are still a novelty not a necessity, and for this I weep. I see pictures almost every day of the farmers markets in Taiwan where a friend shops. They are vibrant and full of people who want to buy the food for their meals.