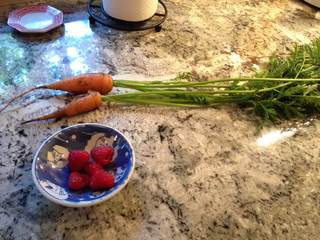 Clean berries and dirty carrots
It is that time of the season when, if you are in the right place at the right time, someone will hand you a bag of beet greens. Or a handful of berries. Or leave a dozen fat oysters at your back door!

It took four to five months to reach this point, but every cloudy day, every seed that refused to sprout, every insect, is forgiven when we bite into a salad of our own growing.

Working together in a garden helps unite a community. When you see your neighbor, or librarian, or volunteer retiree out in the dirt in his or her grubbies, it emphasizes our common need for fresh food. It is one thing (and a nice one) to run into a neighbor in the produce section of the local market, but quite another to see them working the soil. Dirt is the great equalizer.

I am fortunate to live in a time and place where I can garden without regard to my safety. Too many people live in dangerous neighborhoods, or regions, or countries. Given a chance, most people just want to grow their own food and support their own families.

I am reading a diary from the internment of Japanese Americans at Minedoka in Idaho, the location to which most people from Bainbridge Island were sent during World War II. Kept by a school administrator and recently made available by the Bainbridge Island Historical Museum, it documents the day to day struggles and perseverance of the communities crammed together in primitive buildings.

Early in 1943, it was decided that each of these "projects" needed to supply their own food. In Idaho, the temperatures varied from one extreme to the other, and the surrounding desert was harsh and bare. At first, desperate for greenery, families planted tumbleweeds outside their doors. Fortunately, Minedoka had access to water from the Snake River. A diversion was dug to grow crops, and by the end of that year, the farm report showed over two million pounds of food grown. This was in spite of the fact that “Four acres of cauliflower were totally destroyed by insects. Much of the lettuce, Napa, and turnip crops suffered from lack of water and the cabbage and broccoli were partially destroyed by insects.”

Some of these families were able to make their way back to Bainbridge Island after the war, while others settle permanently near the camps where they had been confined, afraid to face hostility along the coast. Those who returned rebuilt community, but never farmed to the extent that they had before.

It is lovely to grow food together as a community. Having your land taken, being moved from a maritime climate to a desert, and forced to grow your own food is another matter altogether. Let’s hope it does not happen again.