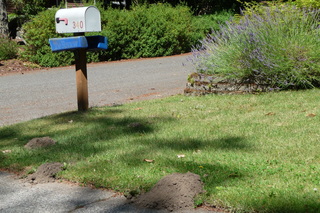 Building mighty mountains
As you can see in the photo, there are three mole hills along the edge of our driveway, and a small one closer to the mailbox. There is a matching set on the other side of the driveway: front doors, back doors. I suppose the little one by the mailbox is a skylight.

Having moles is thought to be a sign of healthy soil. I try to imagine the moles down there, tunneling away through the hardpan and rocks. Or maybe the tunnels are very shallow, sticking to the few inches that pass for soil on our glaciated property. Moles eat insects and earthworms, and, like hummingbirds, must feed voraciously while awake. What are they thinking, I wonder? We imagine the taste of dirt in their mouths while they think they build mighty mountains.

As a child, I remember playing outside of our house in the San Bernardino Mountains. I could hear something in the ground. I wasn’t sure what, and I asked my father to listen. He could not hear it. I waited and waited, sure that something amazing was about to happen, and it did. There was an eruption of soil, and out came the most extraordinary creature I had ever seen. It had shiny gray fur and a pink, star-shaped nose. It appeared not to have any eyes, and its claws were long and sharp. Naturally, it made only a brief appearance, so I could not show my father, but the evidence of the mole hill was left behind. My father thought I was very strange, hearing moles.

great memory. how amazing to hear those animals~