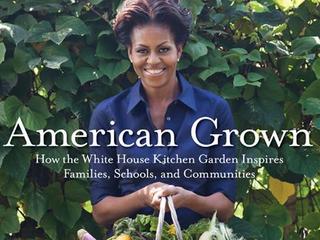 First Ladies are expected to champion causes, but as we learned during the Clinton era, it can’t be a cause that implies policy, such as a plan for affordable health care. Previous First Ladies tried to Make America Beautiful, or Make America Read, or just wore clothes really, really well.

Obama’s original project was “Let’s Move!” a plan to encourage school children across the country to get more exercise. One out of three children in the United States is considered overweight, and/or suffering from weight-related illnesses, such as diabetes. But as soon as she started this, Obama realized that diet and nutrition are integral to our health and well-being. By starting a kitchen garden, Obama hoped to “begin a conversation about this issue – a conversation about the food we eat, the lives we lead, and how all of that affects our children.”

Like many recent books about food and gardens, American Grown is organized by seasons. It starts with a brief overview of previous White House Gardens, from Thomas Jefferson’s fascination with plants, to Victorian gardens and sheep grazing on the South Lawn. Obama and her daughters visited Montecello, Jefferson’s home, to collect seeds for the new garden. The book includes a sketch of that first garden, along with maps of the Obama garden, expanding to include more each season, including a berry patch, rhubarb, and a three sisters planting of corn, beans, and squash.

As with all new gardens and gardeners, mistakes were made, with adjustments, and lots of trial and error. Washington D.C. has ferocious winters, monsoon springs, and punishing summers. Several government agencies hold jurisdiction over the South Lawn, but Obama managed to co-opt the directors and get them moving and planting, too. The South Lawn now hosts its own honeybees, and the Obamas use White House honey for diplomatic gifts.

The book has a gazillion full-color photos documenting the garden, with school children and the First Lady getting their hands dirty. There is even a photo of Obama holding up a vegetable pizza for the inspection of a skeptical-looking Jay Leno. The clear winner in this book is First Dog Bo, who always looks perfectly clean and groomed for his photo sessions. If a very furry dog can look joyous, Bo does so – always happy to be turned loose in the garden to help the many staff and children working in the raised beds.

I’m sure the staff first saw their involvement in the garden as yet another addition to their many tasks, but I think something happened here; the White house staff, whether kitchen-related or not, began to turn out in such large numbers to work on the garden that a strict schedule is maintained to give everyone a chance. Garden-keeping is addictive, and the perfect antidote to office work. The garden now supplies much of the food served at the White House, and one third of the harvest goes to Miriam’s Kitchen, a Washington, D.C. charity.

The book branches out to describe community gardens across the country. This idea is not new – the Victory Gardens of World War II was the first national effort to encourage people to grow their own food on small, urban plots. But we have gotten so far from that idea that many children have not seen food come out of the ground, or eaten anything they themselves grew. The book highlights some of the innovative approaches to this problem of urban food deserts – from the original P-Patches in Seattle, started in 1973, to a former city bus in Chicago that now serves as a mobile Farmers Market to get fresh food directly to inner city neighborhoods. There is a brief nod to native people taking control of their health with an article on Native Hawaiians bringing back indigenous foods.

The book, of course, ends with recipes, but these are manageable dishes devised by the White House chefs – salads, soups, breads and cookies that would tempt anyone to angle for an invitation to a White House dinner.

Is this a policy-setting book? I hope so – let’s bring food production closer to home. Just getting kids to move OUTSIDE and plant a garden is a start.

Great review. There's something heartening about those staffers elbowing for garden space. Not to mention honey for diplomats.