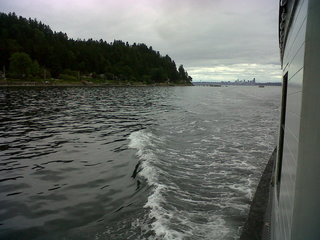 Around the island.
We were about fifteen feet above the water, too high to see what canoe people see. A group of Bainbridge Islanders circumnavigated the island last summer in the Virginia V, an old ferry that has been restored and now serves as a tour boat. Our guide was Dennis Lewarch, the Tribal Historic Preservation Officer for the Suquamish, who recently opened a new museum.

Because they have no major rivers in their territories, i.e., a major source of salmon, the arrangement with other salt water tribes was once that the Suquamish had a far greater range, allowing them to fish as far north as the Fraser River and access more shorelines. Intimately acquainted with Bainbridge Island, the Suquamish designated over thirty seven place names along the shoreline.

The fish spawns move north to south, and the canoe people had about three months in which to gather most of their food for the year. Even the small streams on Bainbridge produced pinks and chum during September, October and November. They would fish all day, and smoke the fish at night, telling stories around the fires. Shellfish were gathered and smoked, then strung on cedar rope like necklaces to be saved or traded for other goods in places like Muckleshoot and Nisqually.

The most striking artifact left on the island is a petroglyph called Xalelos, meaning marked face, or Haleets (Xalilc), that gazes north across the passage to the heart of Suquamish: She never blinks. Eagle Harbor and Eagledale are named after eagles, of course, but that was already its name, “Elaledaltx” in Lushootseed, or Proto-Salish, as Lewarch called it. This is one case where the sound and the meaning almost line up in two very different languages. Lushootseed, the main coastal language, glides and leaps between consonants, with sounds that don’t exist in English. It is the language of water. I remember Vi Hilbert, a much-revered keeper of the language, trying to get me to spit out the consonant that glides down the sides of your tongue, the true ending for “Seattle.” It is somewhat like the soft “x” sound in Mayan.

The geology of Bainbridge reveals an equally slidey and slippery set of rocks. Within human memory, Laxelks, now called Wing Point, fell about three feet during an earthquake. The long, trailing arm of rock that juts into the harbor compels ferries to wend their way along a set course around it.

On May 19, 1792, Captain George Vancouver dropped anchor on the British ship Discovery off Restoration Point. Chief Seattle’s father, Shweabe, and uncle brought deer from nearby Blake Island, and the Suquamish spent the day trading with the sailors; the bounty must have seemed endless. Today, leaders like Billy Frank Jr. of the Nisqually, who was arrested more than fifty times trying to protect family fishing rights, find little to cheer about. The water is acidic, and salmon runs continue to decline. The day-to-day losses – of trees cut, land paved over and shorelines hardened into fish-repellent slabs – have taken their toll.

A few people still look to the future, trying to maintain a sensible, sustainable way to harvest the sea. We will hear from one of them in my next blog.