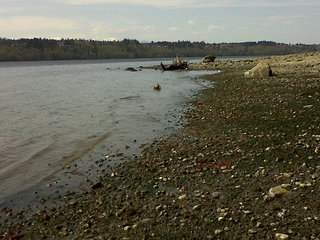 Oyster beds on Bainbridge Island in foreground, Olympic Mountains behind.
Winter has settled upon us, and we are into the long rains of the northwest. Mornings tend to be the driest times, with moisture piling up to break loose in the afternoon.

I sloshed out to Cooper Creek one day to look for returning salmon, to no avail. Bainbridge has just a few streams, and no major rivers. Many of these have been blocked or derailed by waterfront development, and only recently have people begun to restore fish habitat. There are a few runs, I just didn’t see any.

After considering our food availability on the island for a couple of years, I interviewed an Indipino couple who were born and grew up here. The Indipinos, as they call themselves, are a mixed group of Filipino and First Nations heritage from the days in the twentieth century when Filipino men came to the island to work for Japanese farmers. Seasonally, First Nations people came from Canada to pick berries when strawberries were one of Bainbridge Island’s main food products. Many were displaced and nomadic following the Fraser River flood of 1948. They were called crop chasers. Love bloomed, and First Nations women stayed to marry Filipino bachelors.

At that time, developers had divided the island into five acre plots, and each family grew most of its own food, supplemented with rice purchased in the International District of Seattle. Another big exception was the bounty supplied by the waters of Puget Sound. Each recounted fishing with their fathers, including catching Dungeness crab at night on the beach at what is now Fay Bainbridge State Park.

Of course! I thought. The Salish Sea. The Suquamish used the beaches seasonally to fish and clam on Bainbridge. The interior was a dense forest, a giant sponge that soaked up rain to create the deep aquifer that supplies our fresh water today. The First Nations women brought their skill and knowledge of native plants and animals, and how to preserve food. The men brought spices from their native islands. To this day, the men are the main cooks in the Indipino families, throwing big barbeques whenever help is needed to raise a roof or bring in a harvest. This is one group whose food ways bridge the ancient practices with the new.

I will talk about the Salish Sea in the next two blog entries, based on my interviews with the Suquamish tribal historian, and a modern day fisherman who prospers by using sustainable practices.

So on these dark, wet evenings, I wish you the best for the holidays, food made with love, candles lit with care. Tell stories, and listen to the rain on the roof, as so many have before.