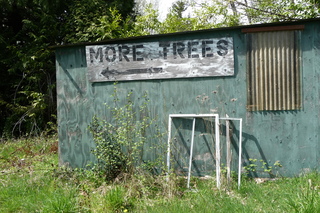 The philosophy behind a food forest is that of abundance, rather than scarcity.
Last week, I took a sunny day to walk land designated for a Food Forest on Bainbridge Island. What is a food forest? It is land on which edible plants will grow using the fewest artificial resources, while attracting and supporting insects, animals, and people to enhance its well-being.

I first heard of the idea from a Canadian friend who posted a story about Todmorden, England, a town that landscaped its public space in edible plants. Seattle, our big sister across the Sound, has also broken ground on a Food Forest on Beacon Hill.

At a workshop led by Chuck Estin and Demi Rasmussen, I learned that the 13.5 acres was once the M & E Tree Farm, donated to the city in 2002, with the restrictions that the land could not be used for commercial purposes, or new buildings erected (two small shacks stand on the land). A Food Forest, to be managed by Friends of the Farms, meets all of the stipulations. In addition, the property is adjacent to the publically-owned Day Road Farm complex of vineyards and farms, and can take advantage of machinery and volunteer help at that site.

The property slopes south and the west, and is bisected by a stream originating at ponds created by the Suyematsu family to serve their properties, now part of Day Road Farm. The stream is joined by several natural seeps and enters a beautiful ravine, lush and cool with ferns. There are several points at which water can be diverted to irrigate plantings.

In the workshop, we learned that an acre of land takes 35,000 gallons of water to cultivate. There are a variety of methods espoused by food forest types, including Hugel (hill) kultur, as practiced and taught by Austrian Sepp Holzer. This consists of small terraces and ponds to collect and distribute water evenly. It sounds a lot like the trincheras used by the Pueblo cultures all over the southwest.

The plants in a food forest need to be grouped by guild – meaning, their specialties: Do they attract bees,? Fix nitrogen, inhibit grass? Each grouping of plants, whether in a keystone planting that faces south to accumulate sunlight in its center, or a raised bed that can compost at its foot, needs to include plants from the various guilds, just like a small community of people. Tall fruit and nut-bearing trees need to be on the north side, so as not to shade out smaller berry bushes and vegetables. Plantings need to attract humans to weed and harvest them, and insects to pollinate them.

This is an entirely different approach to growing food than endless rows planted by machine, doused with chemicals, harvested and processed. It is also different than using even a small tractor or plow.

What good is a food forest? It is a public space where people from all walks of life can see where their food comes from, and take an active part in it if they choose. The food is available to all whether they help grow it or not. The philosophy behind it is that of abundance, rather than scarcity.

I can see the deer now, trying to figure out the quickest route to the food forest. But maybe they, too, are part of the attraction.
Be the first to comment