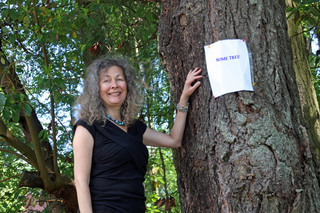 A Douglas Fir in my neighborhood.
It all started with a few trees, a very few trees, but some of the last in the heart of the city. Protesters tried to block demolition of the little park, only to be met with violence.

These are not tree-huggers in California, or other occupants of the “landof the free,” who might seem to have too much time on their hands. These are people who live in Turkey, relatively modern compared to many of their Middle Eastern neighbors. The trees were the last straw, public space to be usurped by today’s monument to wealth and its manifestation, the shopping mall. And also, a mosque.

Prime Minister Recep Tayyip Erdogan finally went too far in serving his conservative masters. While he was out of the country today, the deputy prime minister apologized for Erdogan’s increasingly erratic behavior.

At the park in Istanbul’s historic Taksim Square, a young woman in a red dress simply stood and looked at the line of police in riot gear. A policeman stepped forward and began to spray her directly in the face from a tank of pepper spray. This was not a little hand-held canister, but the sort of tank and nozzle for applying large quantities of pesticide. The force was strong enough to blow her hair back as she turned away.

Why protest the loss of a few trees? Because they symbolize so many things: public space, freedom of assembly, leisure, unconstructed and spontaneous use of time. All of these are frowned upon by the conservative, wealthy class that has begun to hold sway in Turkey. Oh yes, and many of the protesters were drinking alcohol, also frowned on by the religious elite.

Humans come and go, but trees take decades to grow. They are the lungs of a community, taking in carbon dioxide and exuding oxygen, soaking up rainfall to replenish the aquifers beneath our feet. All they do, really, is stand there.

Over one hundred trees were recently cut down to make way for a new subdivision, after years of protests and city hearings by the neighbors to block it. There is not enough water pressure or street capacity for traffic. The houses will be built on the edge of an environmentally sensitive ravine that dips below the highway at that point.

I am trying to save one tree in my neighborhood, a Douglas Fir, slated to be taken down for a sidewalk. It is so large that I can only photograph portions of it at a time. I’ve taken a cue from the book, Charlotte’s Web, by E.B. White, in which a spider tries to save her friend the pig by weaving flattering descriptions into her web. She starts with “Some Pig.” I’ve posted a sign on the tree, and plan to draw attention to its good qualities until the tree is either saved or lost.

The woman in red showed that sometimes that’s all one needs to do: stand there. By doing so, she has become a symbol of freedom. If the trees can stand there for us, maybe we can take a stand for them.
1 Comments

Thank you Kathleen for showing how important trees are and tying your essay to what is happening in Turkey. Very moving!