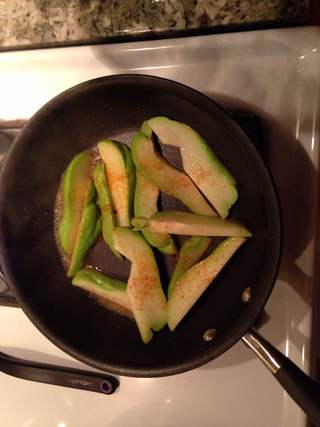 I liked chayote as a child, but I had no idea how to prepare it.
While the East Coast has had a winter of discontent, we have experienced mild temperatures and even sunshine in the Northwest. Our growing season ended last fall with a whimper when freezing temperatures took out my late planting of squash in early November. I didn't think to check the garden space I rent until rhubarb showed up in the grocery store. But there was none in my garden, it turns out. They must bring it from Eastern Washington, which has a much longer growing season.

Instead, I spotted a chayote at Central Market, the next town over. The chayote (Sechium edule) is native to Mexico, and grows on a vine. It looks like a pear that someone let the air out of, wrinkly and green and about the size of my hand. I remembered it from my childhood, and also remembered that I liked it. It had a texture and taste unlike any other vegetable. It was the sort of thing impossible to recount to my classmates when we returned from our annual visit to Chihuahua.

At home, I looked through my Diana Kennedy "The Art of Mexican Cooking" cookbook, since I had no idea how to prepare it. In one recipe, it was chopped up and added to rice, in another steamed, and in the last it was cooked with tomatoes.

When I cut it open, it looked and tasted fresh and clean, almost like a cucumber. The small pit at the center is edible, tasting like an exalted almond.

After reading the recipes, I made up my own. I sliced it into wedges and placed it in a pan of olive oil to which I had added a few drops of sesame oil. After the chayote browned a bit, I squeezed lime juice over the slices, and added a sprinkling of salt and cayenne pepper. Then I added a little water and steamed it.

We served this with a salmon patty and brown rice. It was delicious! I decided not to remove the skin before cooking, but we sliced it off afterwards. A few more minutes of steaming would have preserved the crunch and fresh taste, but made the skin easier to remove.

We are planning our garden for this spring, but it is too early here to take it too seriously. One day, we will take a field trip to the Chimacum Farm Stand, followed by lunch in Port Townsend. That is an excuse to leave the island and enjoy the beauty and variety of the Olympic Peninsula.

The rest of the time, I am teaching and working on my book. It is progressing, but slowly. I wish all of you little cooking and eating vacations to mild climates, or happy memories from your childhoods.