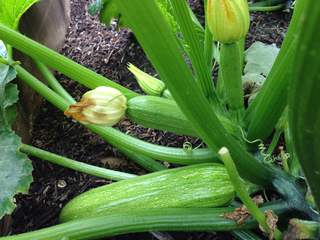 Squash growing in my garden.
Luz and Catriona's story started in sorrow. Luz, who had been a vegetarian for fifteen years and considered herself very healthy, was diagnosed with breast cancer. As Luz endured surgery and follow-up treatment, Catriona struggled to find food that her partner would eat, and that would enhance healing. Their research showed that Latinas have an exceptionally low occurrence of breast cancer until they move to or are born in the United States. Both felt that good food could make a difference, and set out to grow and prepare a smarter diet. This is shared in their lavishly illustrated book from Arsenal Pulp Press.
Decolonize Your Diet is not exactly a cookbook, more of a manifesto, although a very gentle one. It is a thoughtful response and a generous offer to the community at large on how to improve our health.
Many of their conclusions align with mine - that a local indigenous, plant-based diet is more likely to afford a healthy life than taking pharmaceuticals based on research that has little to do with my genetics and background. This is echoed by Bryant Terry, author of Afro-Vegan: Farm-Fresh African, Caribbean, and Southern Flavors Remixed. In the forward to Decolonize Your Diet, Terry describes the book as "part of a larger movement utilizing ancestral knowledge to help communities of color respond to the public health crisis...."
Calvo and Esquibel live in Oakland, California, so finding traditional Southwestern ingredients is probably not as hard as in Washington State. I'm comfortable finding and growing foods that thrive in our maritime climate, but I understand what they are saying: my body, genetically, needs corn, squash, amaranth and citrus. It doesn't need fried foods, it doesn't need much starch or animal protein, and it definitely doesn't need deep-fried Snickers bars.
As these two academics got the hang of small-scale, urban farming (which in their case, seemed to involve a lot of tearing up of concrete) they began to keep chickens for eggs. They sought out and adapted family recipes for their primarily vegetarian diet, and have gotten to know their neighbors, including a Sephardic Jew from the Isle of Rhodes, along with their cultural preferences and genetic needs.
In other words, Calvo and Esquibel brought their eating habits in line with their medical and cultural needs as only hands-on local farming allowed.
One of the recipes in their book is for tortilla soup. I learned my version by eating three times in a row at a restaurant in San Antonio, Texas, some years ago, until I could figure out all the ingredients. It is a glorified chicken vegetable soup, but the Decolonize Your Diet version contains no chicken. This allows the ingredient in the name, toasted tortilla strips, to shine through, rather than be obscured by the chickeny flavor.
The book includes lists of indigenous ingredients at the back, along with mail-order sources. As my local Town & Country Market has restocked after their remodel, I see that they are carrying a wider variety of dry goods in bulk food, including more brown beans and grains like amaranth, and alternatives to processed sweeteners. I look forward to exploring the thoughts and recipes in Decolonize Your Diet as I figure out where everything is now located at T & C. It's a good time of year to try "enmoladas: tortillas smothered in pumpkin mole" and "red pozole with medicinal mushrooms." I have several freezer bags full of Hatch roasted green chiles that are way hotter than advertised, so I will need to make them into salsas and beans.
For my son's birthday yesterday, I made tortilla soup. While it still had chicken in it, I included fresh squash from my garden and used a vegetarian soup base instead of chicken broth.
Poco a poco, the old people used to say, little by little.