Another Trip Around the Sun 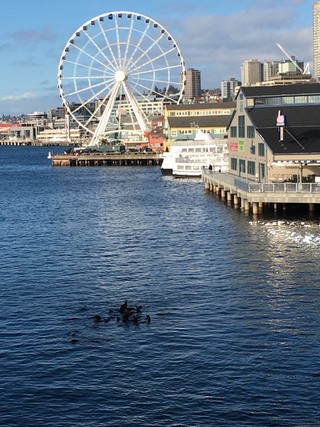 Ferris Wheel on the Seattle waterfront with harbor seals in the foreground.
Another trip around the sun. I have spent the last two weeks contemplating what to write in a year-end blog post. Like many of you, I was more than surprised, I was shocked at the election of - I have avoided even writing it - Donald Trump to the Presidency of the United States. While I have always been actively engaged in politics, I only contributed to local races this year, hoping to retain our Governor and the policies he has worked hard on. While the state of Washington is considered fairly liberal, it is split down the middle on issues of education, environmental preservation, the management of natural resources, use of nuclear power, and a number of other issues. I let my donations to the American Civil Liberties Union and PEN, an organization of activist writers lapse, but I will rectify that. These are organizations that work hard, and often without thanks, for social justice at all levels.

I decided this is has been the Year of Taking Things for Granted. I spent the first six months editing and copyediting my recently released book, The Deepest Roots: Finding Food and Community on a Pacific Northwest Island. After five other books, I expected editing to be relatively easy, but it was a different kind of book, and after a recent conversation with a different editor, I realize I could have used a professional fact-checker in the mix. I will be able to correct some mistaken names and dates in the next printing, which should occur by the end of 2017 if sales remain high.

It is, however, a beautiful book, with a collage of images on the cover by photographer Joel Sackett. If you haven't seen the trailer that goes with it, you can view it here:

I guess I always take it for granted that everyone wants the best for the collective "we," that what is good for the least of us is good for all of us. It must have something to do with how I was raised. We are entering an era in which people will be thrown back on their own resources - public lands might be sold off, or stripped of its natural resources in ways that will endanger our water, our soil, and our air. Short-term financial gain, already considered a worthy goal in this country, will be held as the highest achievement. Private schools will be promoted at the expense of public schools, and services for the poor, the otherly-abled, recent arrivals, and those who speak languages other than English will be deprived of services. The children of white, European immigrants conveniently forget that institutions such as Settlement Houses and churches provided these services for their parents and grandparents, giving language classes, training, and aid in obtaining basic food and shelter.

When I see that the United States sold 80 billion dollars worth of armaments this last year, it makes me sick to my heart. Not only are arms dealers profiting from the deaths of people all over the world, but these same weapons contaminate and destroy the environment wherever they are deployed.

In researching my book, I decided that the essential thing to understand is that power belongs to those who have direct access to the land. Twice recently, people I know put their bodies directly on the line and successfully stopped people more powerful than themselves from committing environmental crimes. The first time was helping to dissuade Shell Oil from continuing to develop the North Slope in Alaska. The second was blocking the oil pipeline in North Dakota from compromising the Standing Rock Indian Reservation water source. I don't know how long either will last, but it seems that some soul-searching occurred once war veterans joined the Dakota Access Pipeline protest, the understanding that this was exactly what soldiers had gone overseas to protect.

A child of the seventies, I'm just old enough to remember white people making cutting remarks to my parents in front of me, real estate agents refusing to show us houses, but idealistic enough to think that, twenty years later, that would be behind us. Twenty years after that, enduring unbelievable treatment as a young woman in the work environment, I comforted myself by thinking this behavior would not be tolerated in the next century. Yet another twenty years have passed, and I cringed while watching Trump stalk Hillary Clinton around the stage during a debate. I so wanted to reach through the screen and slap him. But these are the terms, and this is one of the people with whom we must try to save the land and the future for our children.

Almost two years ago I met with other members of the Opata Nation, and we tried to imagine what our future might be. We are few and scattered and no one inherited a gold mine, but modern technology offers us a way to keep in touch (Facebook group) and share some remnants of our language and customs. Another thing I took for granted was that I would meet again with Teresa Leal, curator of the Pimeria Alta Museum in Nogales, Arizona. Shortly after the beginning of 2016, she suffered heart failure and died at work. Teresa left a legacy of information, artifacts, and eight children to carry on her work. But she took her warm and vibrant presence, as well as the many community contacts she held on both sides of the border. A group of us will meet again this coming March. If you are interested in this aspect of my life and my work, look for my novel, The Flower in the Skull.

Are we getting to food yet? Yes! The growing season for my garden seemed to pass swiftly and without incident. I grew oregano and sage for the first time, and I can see why people love to grow herbs - they are hardy and bug resistant. I was gone all of July, but my husband harvested and ate most of a crop of snow peas. My ten-by-ten-foot plot produced rhubarb, broccoli, two crops of carrots, about half a grocery bag of blue potatoes, and a couple of squash before the season ended in November. I will probably add more root vegetables to the mix, and maybe some leeks this year.

In an era when we will need to be more self-sufficient, especially if there are climate or geologic emergencies, it's good to think that we could feed ourselves if needed. Above all, we must be able to depend on each other, count on each other in rain or shine. Not only food, but culture, and the ethics embedded in each culture, hold a community together.

Wishing you the best for 2017. Don't take anything for granted.