"Another World is Possible" 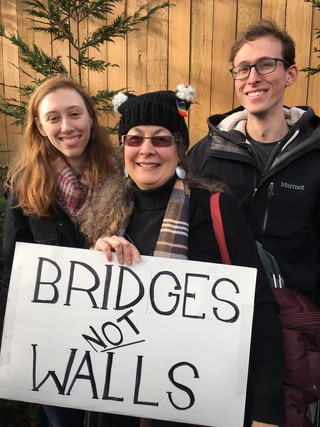 Bridges Not Walls - with my son and his friend at the Women's March, Seattle.
I was thrilled and humbled to walk with upwards of 100,000 people in the Womxns March Seattle last Saturday. 50,000 had been expected by the organizers.

Women of all ages, colors, religious backgrounds and agendas turned out to say we have better things to do than help this man take away our rights - to education, to clean air and water, to health and reproductive care, and to many other rights we now find threatened under the new administration.

I was especially touched by the many mothers and fathers who brought their daughters to the march. It was an initiation, a reminder to yet another generation that we cannot ever take our freedom for granted, but must be active participants in the give and take of the democratic process.

I also thought about the people who are full time activists, rain or shine, on behalf of the people in this country who need it the most - recent immigrants, farmworkers and factory laborers, those who are here because the elite demand their services, but do not want to pay the true cost. This extends up the economic ladder to the lack of childcare available to working parents. The United States has long aspired to join the northern European countries in a bid for a more egalitarian country, but we see those gains slipping away with each new decree that is signed.

In particular, ever since hearing her speak at the "Our Food is Our Medicine" conference when it was held at Suquamish, I have though about Rosalinda Guillen, a woman who grew up in a farmworker family, attended college and became a banker, only to quite her job just short of qualifying for retirement benefits in order to become a labor organizer.

She is now part of a nonprofit called Community to Community that represents farmworkers in their eternal quest for better housing, safer working conditions, and equitable pay.

"We are grounded in the belief that 'Another world is not only possible, she is on her way'" says the website, quoting Arundhati Roy. "Why not a land trust for food production?" asked Guillen. "Why not aim for 15% organic? Only 3 percent of cropland in Whatcom County (north of Seattle) is organic. Why not a twenty dollar minimum wage, and the production of a domestic, fair-trade product?"

When I researched the origins of the idea of "organic" food, I found that it included better worker conditions - that organic food was clean and healthy not just in its substance, but in its origin and yes, even in its concept. It was supposed to be "green" and "pure" because no one was exploited in its production. The Rural Development Center in California still espouses and works towards these ideals.

Organizing farmworkers has to be one of the most thankless occupations on the planet. It takes guts, patience, and a very long view of the world. Yet, in 2016, Sakuma Brothers agreed to negotiate on better conditions for farmworkers, and to recognize the union. There is still a long way to go, but people like Guillen have dedicated their lives to working little by little, day by day, year by year, to make the world a better place.

The womxn's march was just one day, and it is clear that, as my son said, "we are going to have to march more" before there are visible signs of change for the better. I cannot help but think that with "women holding up half the sky," as they say in China, and demanding equality, even the most self-centered man will see that the world can be a better place, even for him.