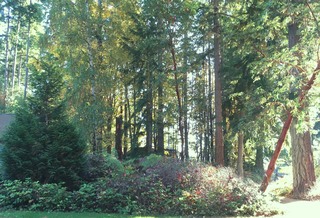 West of the salal is a younger madrone, leaning for the light, and a huge Doug fir that an arborist referred to as a sentinel tree. That means it is one of the anchor trees in our yard, stout and strong enough to help protect the other trees during storms. If it were removed, as proposed during the development of the street and sidewalk, it would weaken all the other trees and leave them susceptible to destruction during severe weather.

Rather than lose our anchor tree, we asked the developer to curve the sidewalk east of it, giving up a corner of our property for the integrity of the neighborhood flora and fauna. The result is a graceful walk through the woods that lasts about ten feet, but gives the illusion of more, as the view is framed on both sides by greenery. We managed to save one other tree along the western border by curving the walkway around the west side, a deviation from the straight sidewalks considered the norm.

It doesn’t take a lot to enhance our relationship with nature on a day to day basis. “Research has shown that exposure to nature can enhance immune function and child development, and reduce depression, stress and Attention Deficit Hyperactivity Disorder,” according to Josh Lawler, Sara Jo Breslow and Ben Packard of the University of Washington EarthLab’s Center for Creative Conservation in a letter to the editor of the Seattle Times (November 6, 2017).

At the same time that Seattle plans to increase housing stock in order to relieve the pressure on middle and lower income renters and owners, it plans to increase its tree canopy. I’m not sure how that will happen, as backyards and adjacent properties are developed into multi-unit buildings. On a recent visit, we walked past formerly modest bungalows in Wallingford that have been inflated into bloated, lot line to lot line monstrosities meant for single families. I can’t think of a greater waste of space in an urban environment.

Regardless of where Amazon’s “second headquarters” are located, the company has already announced the hiring of 20,000 more workers in the Puget Sound region. Other companies have similar plans. We cannot pretend that it won’t affect us: A title wave of workers is heading west across the water towards Bainbridge. There will be growth, and we need to channel it into locations and transportation routes that will serve all of us, not just those willing and able to drive everywhere.

I didn’t especially want a sidewalk by my house, much less the development that it serves. We worked hard to delay that development, which preceded the Visconti development on High School Road that garnered so much attention. Rules and regulations for local developers need to be as stringent as for developers from out of town – no double standards. The tragedy in our neighborhood, which eliminated a small woods before the Sound to Olympics trail and Bainbridge Landing broke ground, remained local. Visconti (now given a more genteel name) and the development in our neighborhood are just a taste of what Bainbridge will need to grapple with over the next few years.

The deer in our neighborhood now stumble out of the ravine searching for a bed of pine needles, or a berry patch, that no longer exist. One was hit by a car recently, and expired in the neighbor’s yard. It won’t be long before deer in the area are rare. I did not see the quail family this year, present when we moved in 22 years ago, absent for at least 15 years, then back again for a couple of years.

People are hard on nature. We like hard surfaces, bright lights, and we make a lot of noise. I hope that, as we increase our numbers on Bainbridge, we can remember to leave a few corners where plants can thrive and wildlife can curl up, if only for a few moments, on its way to somewhere else.