Adaptation in the time of Coronavirus 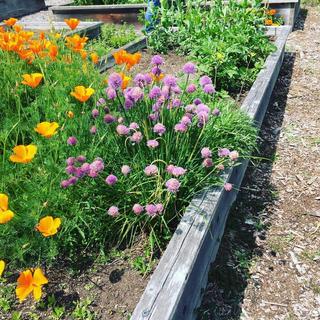 Poppies and chives in my garden

We have little to complain about on our island. Our grocery stores still have food, and our homes still have power and water. Like everyone, we are apprehensive about what the future might bring. Novel coronavirus deaths have been abrupt and shocking, hitting both elders and younger adults with a sudden inability to breathe.

When our old world ancestors met our new world ancestors, they brought plagues and diseases foreign to our immune systems. Although we had medicine that was tested and true, one can see that a pandemic, especially in the spring, could easily wipe out a village by disabling hunters, fishers, and farmers at the time of year most important for gathering food. This is when our ancestors were the most vulnerable. The winter stock of dried food would be exhausted, and the new shoots and fish runs, plus birds producing eggs, would be inaccessible to a physically compromised population. We would be mourning our dead as they joined the ancestors, too weak to gather food effectively.

We walk to our vegetable garden twice a week or so to see if any seeds have sprouted. So far, the peas are billowing upwards, the blue potatoes are happy, while chives and poppies rule the rest. Our seeds continue in a dormant state, or the slugs carried them away! The streets are nearly empty, and passersby give us a wide berth. The chilly shoulder reminds me of coming to the Northwest 35 years ago, when the Scandinavian sensibility dictated that one stuck with one's own kind.

Now, the coronavirus, like the bad uncle released from prison, has come to visit. We will react, we will fight, and we will learn. A society is only as strong as its most vulnerable, so we must look to the needy and the elderly as this angel of death passes over.

In his futuristic fiction, writer Greg Bear has described how retroviruses can jump hosts when they sense that their previous hosts are endangered. One can't help but think that as the last wild places in the world are subjected to rising temperatures and deforestation by humans, the once-sequestered life forms will attempt to jump. If we come into their habitats, with our furry, warm-blooded bodies, and threaten the bats, pangolins and other exotics, we become by default available hosts. They adapt or die. We adapt – with the help of antibiotics and vaccines – or die.

Words have power, and although I have not written much in the last few weeks, I have attempted to lessen the hold of the pandemic on my thoughts by pairing it with other words: "Pandemic bandanas." "Pandemic phashion." "Pandemic dandelion." "Pandemic lunch." It has become part of the everyday, the quotidian. We step off the curb into the empty street without a thought, social distancing as we pass other people on foot.

Our son lives in Seattle, and we have not seen him in person for about eight weeks. I'm so glad we traveled to Spain together just before all of this. Little did we know that the coronavirus was nipping at our heels, swirling around us on the hands and tongues of the other travelers.

It might be too soon to tell, but another point Bear makes is that societal response to a pandemic is not a gradual readjustment, but rather a quick and radical change. Even as the retrovirus he describes in Darwin's Radio alters its hosts as they mature, the society around these individuals must adjust to and absorb them. They are like us, but not, just as, Bear speculates, earlier retroviruses might have been in play as our ancestors adjusted to a dryer, cooler climate in order to survive.

The world as we know it just shifted again. A generation has grown up always having access to computers, cell phones, and small, portable appliances. Public spaces are safe and shared. International flights and readily available antibiotics mean that people travel the world with ease.

In the 1980s, Kim and Ela Esterberg set out to make a difference in the world. They met at college in Eastern Washington, and hit on the idea of importing coffee beans from Nicaragua in order to sell them and give the profit directly to the farmers. A first suitcase full of coffee beans led to the establishment of Ometepe Coffee, a co-op that imports coffee beans, roasts them on Bainbridge Island, and sells them through regular grocery outlets. The money is sent back to the community that grows the coffee beans on the island of Ometepe, in the middle of Lake Nicaragua. There, a committee decides where to invest the money. It has gone towards building a reliable water system, homes, schools, and a library. A local deaf community has received education and resources for the first time. Scholarships have sent students to college, some of whom return to teach or provide other needed services.

And the coffee is good! It is the coffee I buy and grind at the store, then drink every morning by making one cup at a time. It's easy. If you want to get fancy, you can buy an expensive expresso machine. But then, why would you ever leave the house again?

The pandemic has shown me reasons to want to leave the house. Our community, as I surmised in my book, The Deepest Roots – Finding Food and Community on a Pacific Northwest Island (University of Washington Press, 2019) is well prepared for emergencies. The city has a fund for precisely such an event, and a separate organization called Bainbridge Prepares which is set up to put resources to the best use on the island in case of emergency. It is a font of checklists and organizational charts, but also provides answers to many of the "what if's" that you don't want to have to figure out if your house has just blown away or a previously unknown disease begins infecting people. Other towns in this part of the state are also prepared. (https://bainbridgeprepares.org/2020/04/20/our-prepared-nehalem-neighbors-and-bp-too-get-noticed/)

Helpline House is our local agency for providing basic services, and it ramped up food distribution when it became clear that institutions like Super Supper, which provides in-person hot meals during the last week of every month, could not safely provide the volume of food needed. The Bainbridge Artisan Resource Network, a collection of studios where I sometimes teach, is closed, but its commercial kitchen is cranking out lunches for students who were eating at school, families who depend on outside help, and the small but nevertheless existing homeless population on the island.

Local restaurants began accepting and delivering food directly to the hungry as supply chains broke down. But soon, most were offering food by pre-order and pick-up to go. Although we don't usually eat out that much, we have made a point of ordering food once a week from a local restaurant.

Our governor, whose private home is on Bainbridge, serves as an example of clear-headed thinking. He appointed a medical specialist to oversee state-wide plans and their execution, and local officials were ready. This was not a drill.

As the first terrible wave has passed over us, I look forward to visiting the mainland, and my favorite restaurants in the International District, within the next few weeks. As a writer, not that much has changed in my day-to-day life, since I have been able to teach, chat, and edit online. As a person, I miss the magic of real human contact. We have all become familiar with software that makes it easy to communicate. There are jokes about not wearing pants anymore, since people just see us from the waist up. I've started powdering my shiny face for face-to-face sessions. In many cases, we will not go back to the old way of doing things.

This is not a drill.