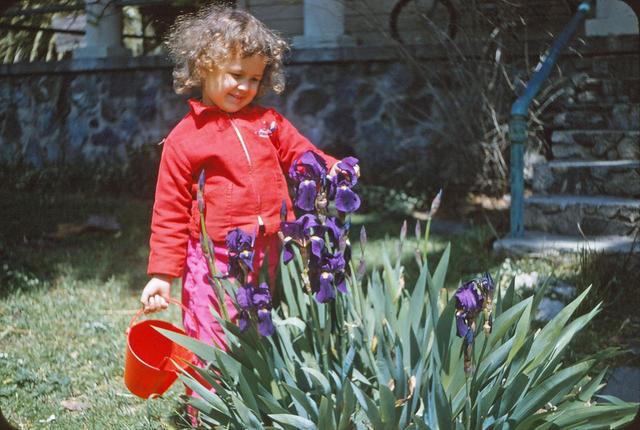 In front of the Optimist Boys Ranch in Devore Heights, California.

Well, it seems I have to review my entire life to find the two or three sentences that will locate my relationship to the llorona stories, so you might as well enjoy the movie. Norma Cantu and I are co-editing an anthology of these stories, and I am working on an introduction.

When I was very little, my family lived in the San Bernardino Mountains, in an un-incorporated town called Devore Heights. It wasn't really a town, but there were two competing candy stores near enough to the bus stop to tempt us in the morning. There was a small Baptist church, an American Legion Hall, a nudist colony, and the Optimist Boys Ranch. The local KKK held their meetings at the American Legion Hall, and the adults would speculate on whether they would come after us or the other Mexican family in town.

At night, the wind blew fiercely, the wind "like a scream" that Joan Didion later described in her essay, "Dreamers of the Golden Dream." Devore was situated in Cajon Pass, at the top of a steep climb on I-15 headed out to the desert, also the old Route 66. I remember waking to its moans around the bamboo patio roofing outside my window, building and building to an earthshaking noise that sounded as though it would scrape the earth clean before morning. If I was really rattled, I would go into my parent's nearby bedroom (I actually slept in their closet) and try to wake them. These winds were the famous Santa Anas, and I have not slept well since.

Devore Heights was the location of the Optimist Boys Club, a charity run by the Optimist Club, a men's service club in Los Angeles. When my father took the job as superintendent, he, my mother, and their three daughters moved into a grand white house that resembled a southern gothic mansion. It was my one-year birthday, August 29, so I don't remember much. We lived downstairs in a cramped apartment, while the boys, no more than twenty, slept in a dormitory upstairs with a counselor, a single guy who was supposed to keep them under control.

Most of the boys came from what were called broken homes, and were truants or convicted of petty crimes. Many had at least one parent incarcerated. Boys were lucky if they came here instead of to a prison facility, but they had to be under 18 and not charged with any violent crimes. The fresh air, keeping chickens, and riding one of our two horses was supposed to cure them of their criminal inclinations. Once in a while one or two of the boys would run away, but there was really no place to go. Maybe they tried to hitch rides. I remember one trying to hotwire one of the cars, but while he was distracted, my father or the counselor removed a part from under the hood and kept the car from starting. Besides my sisters, these were my first playmates.

I have lots of "memories" of Devore Heights, some of them gained from listening to family stories later, some from my own experience as a child close to the earth. I could not see very well since no one knew how near-sighted I was, but I remember fingernail-sized, pale blue butterflies and orange poppies. When a small house across a road and up a hill from the back of the Boys Ranch went up for sale, we bought it. The house was on "four square acres" according to the deed of sale, and had a neglected apple and pear orchard between the house and the road. Much of the property was undisturbed desert, with yuccas, cactus, and assorted wildlife, including beautiful yellow and brown rattlesnakes. My father set traps for the gophers that were snacking on the tree roots. Once, a glistening mole with huge pink hands surfaced at my feet one evening as I stood outside the house. I could hear it coming somehow, and I stamped my feet impationtly until it appeared.

I did not learn about La Llorona until later, when one of my older sisters who played the guitar sang about her in the famous song. Still, I thought of her as a really sad woman with this beautiful song being sung to her. The version my sister knew did not have any children in it, or unfaithful lovers, just sad words in Spanish. I don't remember my mother singing that song. She preferred the music of Agustín Lara.  I'm sure my cousins in Chihuahua, where we spent part of every summer, knew about her and probably tried to scare me, but I was pretty immune to such threats. I remember making a person-shape in my bed out of stuffed animals, covering it with a blanket and going outside to play. My mother wondered at how I was sleeping so late for once, and didn't disturb my quiet form until she looked outside and saw me on the swing set.

It wasn't until college that I asked a friend to recount the story of La Llorona to me as she knew it.