The Deepest Roots is launched! 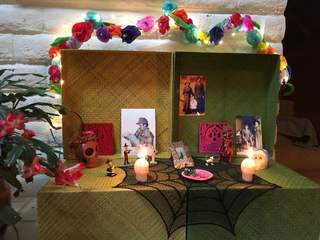 In spite of a major windstorm, fifty or sixty people turned out to the Bainbridge Island Museum of Art to celebrate the release of The Deepest Roots: Finding Food and Community on a Pacific Northwest Island.

The celebration included luscious food locally sourced from our farmers, including Butler Green Farms, Persephone Farm, Laughing Crow, Iggy's, and the Bainbridge Island Winery. I was delighted to have people I interviewed meet each other, and Joel Sackett's evocative photos graced the small gallery near the auditorium. Honeytoad's trailer was called "The most beautiful book trailer" the Seattle Review of Books had ever seen. You can view it here:

I've spoken at three venues since then, and have about a dozen more to go over the next few months. This is how book publishing works: a few quiet years of research, interviews, and writing, a lot of noise for a few months, hoping to pierce the wall of constant marketing with which we are bombarded, then back to work on the next book.

High Country News will run a profile written be Melissa Hart in their fall Books issue, with photos by Jovelle Tamayo.

Tomorrow is November 1, and we build a small altar in our house to remember our ancestors, putting up different photos each year.

This year, we have a photo of Wayne's brother, Marty, holding his new baby girl, Nora Ann, in 1991; Wayne's parents, Marjorie and Herrick; and two photos of my father David, with his parents Refugio and Celso. These were probably taken in the years shortly after they arrived in the United States after walking north from San Julian, Jalisco, during the Mexican Revolution. The men were recruited by the Santa Fe, Atchison, Topeka Railway to work in the roundhouse in Topeka. On the left, my father is about two, and his mother looks tired. Celso is very thin. In the second, they are about a year older, but look better fed. Around 1919, Celso returned to relatives in Aguascalientes, where he died of tuberculosis. My grandmother remarried, unhappily, but that husband died of cirrhosis of the liver. She mostly raised my father by herself on the outskirts of Redlands, California.

The Deepest Roots is about food, but it is also about the cultural backgrounds we bring to it. In the case of my grandparents, a period of starvation certainly influenced their later attitudes about food. Both of my parents came from backgrounds of scarcity, and were drawn to sweets and fats in their diet, even as they knew, in an abstract sense, that these foods were not good for them. In my mother's case, diabetes and strokes ran in the family, and she died of complications from a series of strokes. In his sixties, my father became a vegetarian, lost fifteen pounds, and lived to ninety-four.

With each generation, we know a little more about our place on the planet, and how what we eat affects our overall health. But each generation also loses knowledge from earlier generations. My father's grandmother, whom I never met, was a curandera who kept some of the people in their refugee party alive, including my father, who had become very ill along the way. At that time, women were still largely in charge of health and childbirth. Once schools to train doctors in the European fashion were established in Mexico, it took a long time before women were admitted. Matilde Petra Montoya Lafragua was the first woman to receive a medical degree, in 1887.