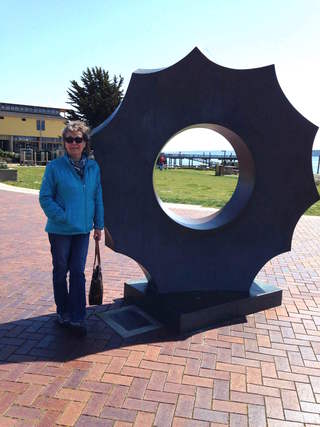 Visiting Port Townsend. Next to a sculpture by Gerard Tsutakawa.

After the gift of a beautiful sunny day yesterday, we received a second today. Too nice to waste indoors! So we drove to Port Townsend, one of my favorite places, to visit the waterfront, eat lunch, and visit the Chimacum Farmstand.

Lunch was at The Fountain, a restaurant one flight up and two streets away from Water Street, the main drag. I have been admonished by my son for taking photos of my food in public, so let me just say that the mushrooms stuffed with shrimp and crab and smothered with Hollandaise were almost too pretty to eat, with a thick twist of lemon and a large-leafed parsley on top. It is across the street from the lovely Terry Building that I have fantasized about owning, with a bookstore downstairs and an apartment up. But I am not a business person, so it will never happen.

The town of Chimacum is not much more than a crossroads on Highway 19. On one corner is a gas station, and on another the farm stand, offering groceries and produce from the local farmers. While we were there, a metal framework was going up that looked as though it would support an awning. I am guessing they plan to double the current space, at least for the summer months. It stands on low ground, close to Chimacum Creek, and inside, I have seen photos of heavy flooding in the area, so I hope they are okay with that.

I bought broccoli and mixed green starts for my plot at The Rock Farm. I planted them alongside the blue potato starts and carrot seeds I planted about three weeks ago. After I balked at the price of strawberry pots at a local store, a kindly employee gave me one she had at home and was not using. In turn, I bought strawberry plants at the store and shared half with the neighbors. This is my first attempt at both potatoes and strawberries, so let's see what happens. This year, I am growing beets for Helpline House, our local food bank, and they are sprouting nicely.

Tomorrow, it will probably rain again, and sometimes, after an early, sunny spring, it rains until the first week of July! So I am thankful for the good weather, access to water, and access to a sunny plot of land.